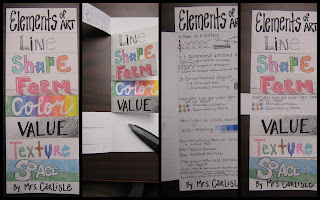 After my students created these really cool element of art graphic organizers (see original post here), I challenged them to create a cube showing their knowledge of the elements of art. Each side of the cube would represent one element of art.

"But Mrs. Carlisle there are only 6 sides and there are 7 elements!"

Yes, my children but what is a cube?

The challenge was that they were given this project with 10 minutes left in a class period and the instructions to finish drawing it out at home. We would assembled them next time.

When students entered the room a week later I had a timer set with 11 minutes. When the bell rang I started the timer. They were told to cut on the solid lines and fold on the dotted lines. Those students who came to class with their cube work done had PLENTY of time to finish. Those who weren't prepared had more pressure. At the end of 11 minutes it was time to start something new. I then went around and graded the cubes. They received 1 point for bringing their cube, 1 point for having the elements of art drawn out, 1 point for assembling the cube and 1 point if they did a really great job.

There was some massive scrambling to get points but at the end of class we had a great discussion of how important it is to be prepared. Those students who were prepared had a simple time completing the task. Those who were unprepared were paid the price. 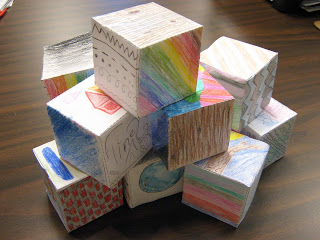 It was a pretty fun way to teach a valuable lesson and it was great review of the elements!
Posted by Jen Carlisle at 2:17 PM

Email ThisBlogThis!Share to TwitterShare to FacebookShare to Pinterest
Labels: elements of art